Your AdBlock is on

We know ads can be annoying, but they're what allow us to make all of Discord Boats available for free. Please help us continue to provide you with our service for free by whitelisting Discord.Boats on your ad blocker. if you really can't stand to see another ad again, then please consider support our work with a contribution to Discord.Boats and get some cool perks along the way

We now have a Discord server!

Consider joining our Discord server to participate in community events, giveaways and more

This bot is for mature audiences only, By clicking 'Accept', you agree to the Discord Boats Terms of Service, and you are willing to see adult content.

Are you sure you want to delete this bot?

An Anime-themed action bot that resolves around interacting with users in a fun, enjoyable, and unique way on Discord.

A fun and exciting way for users to interact with one and other on Discord. Unlike other bots, Milim has a powerful Mention System that can find a user through advanced algorithms. This helps reduce the amount of @Mention used, which can be annoying for some users in the long term.

An example of how the Mention System works in a detailed perspective.

Milim also has various other commands, all spanning from Utilities to Anime. Milim also has a few NSFW commands for the lewdest weebs out there... Although, shame on you Senpai... ~

Take a breather... with some fun commands!

Take a moment to relax with Milim's fun commands! She has all from OwOify to Ship. Heck, we even have Cat or Dog command for those that want to cheer up. 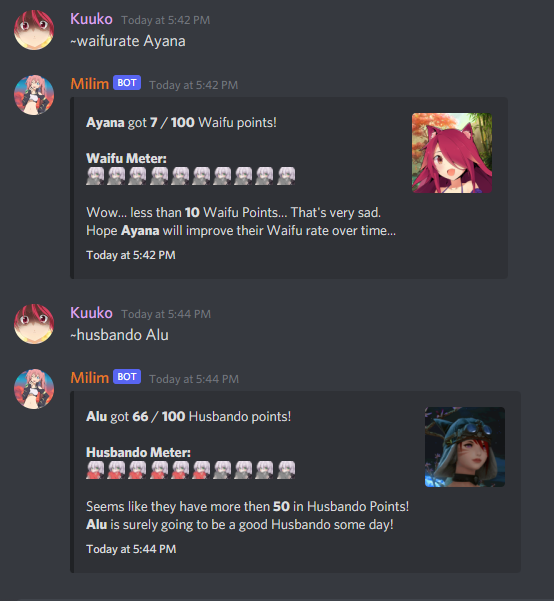 So sorry Ayana... Well, you're a bot so no hard feelings, yeah? 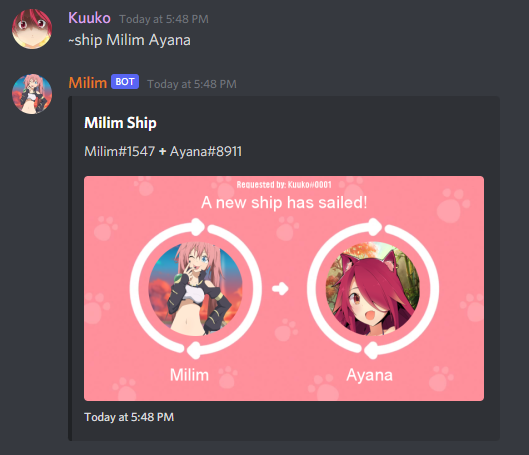 Ship two who secretly like each other for their hilarious reactions! xD

Want to marry someone, but is too young or they live far away?

No need to worry, Milim got you covered! Propose in a weeb way, through 2D interaction on the internet. Nothing better, or am I right, all you fellow shy introverts out there?

Are you bored? Watch some Anime!

Do you ever feel bored or tired of not finding the right anime through anime lists or "top 15 anime series of all time" websites? No need to fret kiddo, I've been there and done that. So now I've made it so that you can also get out of that bad habit, all through a simple Discord bot command.

MyAnimeList - Random Anime, Manga or leave empty for either of them 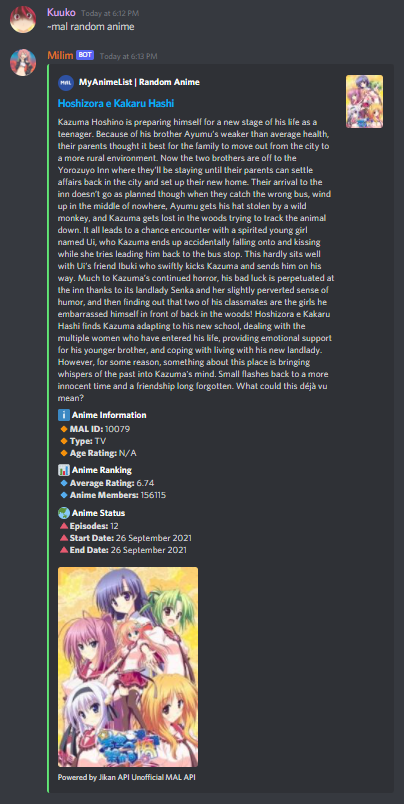